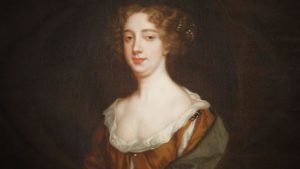 Janet formed part of the panel discussing Aphra Behn on 12 Oct on BBC Radio 4. You can listen to the Podcast here.

Melvyn Bragg and guests, including Janet, discussed Aphra Behn (1640-1689), who made her name and her living as a playwright, poet and writer of fiction under the Restoration. Virginia Woolf wrote of her: ‘ All women together, ought to let flowers fall upon the grave of Aphra Behn… for it was she who earned them the right to speak their minds’. Behn may well have spent some of her early life in Surinam, the setting for her novel Oroonoko, and there are records of her working in the Netherlands as a spy for Charles II. She was loyal to the Stuart kings, and refused to write a poem on the coronation of William of Orange. She was regarded as an important writer in her lifetime and inspired others to write, but fell out of favour for two centuries after her death when her work was seen as too bawdy, the product of a disreputable age.

The image above is from the Yale Center for British Art and is titled ‘Aphra Behn, by Sir Peter Lely, 1618-1680’