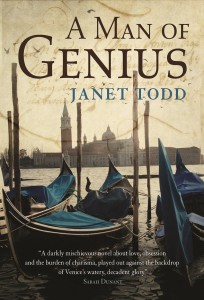 A Man of Genius portrays a psychological journey from safety into obsession and secrecy. It mirrors a physical passage from flamboyant Regency England through a Europe conquered by Napoleon.

Ann, a successful writer of cheap Gothic novels, becomes obsessed with Robert James, regarded by many, including himself, as a genius, with his ideas, his talk, and his band of male followers. However, their relationship becomes tortuous, as Robert descends into violence and madness.

The pair leaves London for occupied Venice, where Ann tries to cope with the monstrous ego of her lover. Forced to flee with a stranger, she delves into her past, to be jolted by a series of revelations – about her lover, her parentage, the stranger, and herself

Praise for A Man of Genius

This is a haunting, sophisticated story about a woman slowly discovering the truth about herself and the elusive, possibly illusive, nature of genius.’ –Sunday Times

‘Strange and haunting, a gothic novel with a modern consciousness.’ –Philippa Gregory’

‘A quirky, darkly mischievous novel about love, obsession and the burden of charisma, played out against the backdrop of Venice’s watery, decadent glory.’ –Sarah Dunant

‘A mesmerising story of love and obsession in nineteenth century Venice: dark and utterly compelling.’–Natasha Solomons

‘This is the first novel by the celebrated literary critic and biographer Janet Todd, and obviously makes use of her decades of reading and writing about women writers of the eighteenth and nineteenth centuries… Great stuff.’ —Harriet Devine

‘[A] gripping, original historical novel with abundant thrills, spills and revelations’ —The Lady

Reviews and Appearances for A Man of Genius