Janet Todd has written many books about female novelists – now, at 73, she’s penned a novel herself 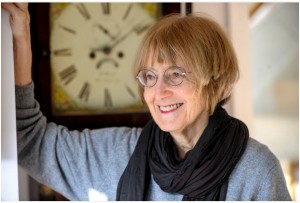 Janet Todd has spent much of her career writing about female novelists, and now – at the age of 73 – she’s finally written a novel of her own. Emma Higginbotham meets her.

If you have a question about a female author, the chances are that Janet Todd will be able to answer it.

An eminent Cambridge academic who’s written dozens of books about women writers – including an encyclopaedia, no less – she’s an expert on all manner of literary ladies, from the little-known to the stellar, and is particularly noted for her work on Jane Austen.

But now there’s a new female author on the scene who’s commandeering Janet’s attention. Herself.

At the tender age of 73, the former president of Lucy Cavendish College is about launch her debut novel, A Man of Genius. And if the pre-publication praise is anything to go by (‘haunting’, ‘intriguing’, ‘beguiling’, ‘darkly mischievous’, ‘mesmerizing’, ‘utterly compelling’) it seems that Ms Todd has a hit on her hands.

So why has it taken her so long to write a novel of her own? “Well I always wanted to be a novelist; I wrote stories right from the beginning,” says Janet. “But I had to make a living. If you do very well out of novels you can make a living, but mostly you don’t. It’s not a way to keep children and a home. So I became an academic; and I was always interested in lives, so I worked on women writers.”

Jane Austen would certainly approve of the novel’s setting, as A Man of Genius opens in Regency London – but anyone expecting an Austen-esque romance between a perky, loveable heroine and a darkly dishy hero will be in for a shock.

Our central character is Ann, a troubled author of gothic horror novels, who becomes obsessed with Robert James, a charismatic – and equally troubled – writer with rather loftier ambitions. They embark on a fraught relationship, “a love flecked with revulsion”, and move to Venice, where life takes a nightmarish turn.

“I wanted to show a relationship that was tortuous, difficult, eccentric, and exhilarating – and not just of a victim and a tormentor, but something that’s collusive,” says Janet. “They both end up somewhat destroying each other.”

Ann, you see, is no helpless victim: “I set her up with a damaged childhood, and she has difficulty relating to anybody – except in imagination. And she is a bit of a stalker at the beginning: she goes after him. Whenever he tries, perhaps for the sanity of both of them, to pull away, there she is again.”

But why? Balding, pasty, and cursed with a violent temper, James is hardly Mr Darcy. Yet Ann is arrested by his charisma: “He’s not physically attractive, not immediately,” agrees Janet. “I wanted a comparison between the conventional, stylised characters that she had to create – tall, dark, handsome, broody – and the person that she was obsessed with. The chemistry is there, and they’re caught.

“I like tormented relationships,” she adds. “I like people whose lives are confused and muddled and who’ve perhaps not made the right choices, but are resilient in the end. I like reading about that kind of person.”

But there isn’t, she insists, any autobiographical connection between Ann and herself: “The only thing I have taken is that I too had a very lonely childhood, and I filled it with fiction.”

Originally from Wales, Janet’s father was connected with the armed forces, and home could be anywhere from Bermuda to Ceylon: “It meant that I lived in books,” she says. “My parents were not educated people, they weren’t great readers, so I read a lot of popular fiction of the time: Daphne Du Maurier and Neville Shute, and whatever was in the libraries in these ex-colonial places. I read it all.”

Her love of literature secured Janet a place at Newnham College to read English in 1961, but she soon discovered that there were virtually no women writers considered worthy enough to study by the fusty administration of the time: “Only Jane Austen and George Eliot were allowed in the pantheon of great writers.”

Newnham, too, had the distinct whiff of the girl’s boarding school about it (“you got out of it as quickly as possible, and marched over to the men’s colleges”), and the ladies were put very much in their place in the academic arena.

“The discrimination was overt and straightforward,” recalls Janet. “The lecturers were very rude to the few women who were here, and you weren’t allowed in the Union. We were second class citizens, quite clearly. And even with an education from Cambridge, the emphasis was certainly on marriage and having children. You forget how little a time ago that there really was nothing.”

After graduating, Janet secured a job in a tax office, “and at the last minute I thought ‘I can’t do this, I simply can’t’, and I answered a little advertisement in the newspaper: ‘Teachers wanted for Ghana’. I still wanted to be a novelist, so I went.”

She spent three-and-a-half happy years there, teaching English literature to university students, and met her first husband; they moved to his native America and went on to have a son and a daughter. But the marriage didn’t last. “It did not. The idea was that we would live part of the time in England – I had this rather idyllic notion of what England was like, taken entirely from Wordsworth – and he had agreed but then didn’t want it, so there were strains there.

“I also had not wanted to be an academic, but sort of fell into it – and I found I was doing quite well. I was publishing easily and people were wanting my work, so I was doing rather better than he was.”

Ann spent 14 years in the USA and Puerto Rico, championing feminism – and starting but never finishing novels: “There was always a contract to do something else,” she explains. “I did write an awful lot of books on women writers, and I started the first journal devoted to women’s writing, so all that activity was taking up my time.”

In the early 80s, she moved back to Cambridge and taught at Sidney Sussex for seven years, followed by a decade at the University of East Anglia, then a long stint in Scotland at the University of Glasgow and the University of Aberdeen. “Then I don’t know quite what possessed me, but I’d been an honorary fellow of Lucy Cavendish [the Cambridge college for mature female students], and I still was very interested in women’s education, so I took that job.”

Janet enjoyed her seven-year term as president “for part of the time,” she grins. “Giving out degrees in Latin and dressing up is lovely for three or four years, but it can get a little wearing.” Part of her legacy was creating an annual literary festival, Women’s Word, as well as a fiction prize, “so that was all fun. I feel quite proud of what I did there, and I’m sure it will go on splendidly.”

She retired last summer and, now an honorary fellow at Newnham, Janet lives near the college with second husband Derek – and is thoroughly enjoying her new career. “Yes yes yes! I have to say I’ve been so happy ever since. This is really a good period,” she says.

“I really thought when retirement came it would be wonderful, and I would potter down to the market, and have a cup of coffee, and meet a friend – and I’ve hardly done any of it! I’ve been really obsessed with writing.”

Does she ever find herself inadvertently copying the style of some of her much-loved lady authors? “I certainly can’t get the style of Jane Austen,” she says with a laugh. “I can hear her criticism, shall we say, in my head, because she was very tart about other writers. And when I feel I might be going over the top with my adverbs and my gruesomeness, I think about her, and how she would look at it.”

And any regrets about waiting so long to start finally writing books of her own? “I suppose I wish I’d perhaps given up administering a little earlier, and got going then, but I might not have had the luck of finding the publishers,” she shrugs.

“So at the moment I feel very happy about what’s occurred, and very excited about this new career. I just wish I had a few more years to live it!”

:: A Man of Genius is published by Bitter Lemon Press on Thursday, March 10, priced £16.99. The book will be launched at Heffers Bookshop, Trinity Street, Cambridge, on Tuesday, March 8, at 6.30pm, with extracts read by Miriam Margolyes. Tickets are free but must be booked in advance – click here for details.
Read more at http://www.cambridge-news.co.uk/janet-todd-written-books-female-novelists-73-s/story-28860393-detail/story.html#oMXsYXrVS5Gx2Z8G.99