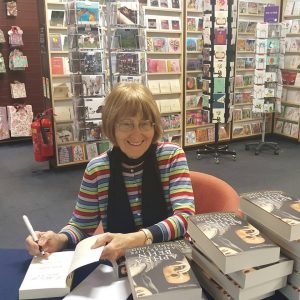 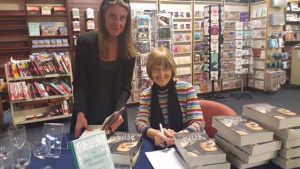 The launch party took place on the 13th June 2017 at Heffers Bookshop in Cambridge yesterday evening and was very well-received by all.

Thanks to all those who came along and especially to Vicky Gilder, David Wightman, and Katherine Bright-Holmes for so much support and to Jane Monson for reading Aphra. #aphrabehn #booklaunch

The book is now available to buy: https://tinyurl.com/ya5aze9t

Praise for the hardback edition

‘Janet Todd is one of the foremost feminist literary historians writing in this country. She has devoted her literary career to recovering the lives and works of women writers overlooked and disparaged by generations of male literary scholars.’
Lisa Jardine, Independent on Sunday

‘Janet Todd guides us with unfailing buoyancy and a wit all her own through the intricacies of Restoration theatre and politics. [Behn’s] epitaph seems to suggest her wit is buried with her. Not at all; it is now wondrously resurrected.’
Michael Foot, Evening Standard

‘Thorough and stimulating… clear, readable prose… a fascinating study of the public face of Behn, of its shifting masks and modes.’
Maureen Duffy, Literary Review

‘A major new biography… Todd’s rich biography will be of interest to everyone who cares about the period or about women as writers.’
Jane Spencer, The Times Higher Education

‘Todd has documented so able the daring attempt of a woman to write, both for her daily bread and immortal fame.’
Ruth Perry, Women’s Review of Books

‘Todd has shown that even determined secrecy and a series of carefully shaped masks offer no protection against posterity. This is a much of Aphra Behn as we are ever likely to know.’
Brian Morton, Scotland on Sunday

‘Janet Todd’s brilliant biography of Aphra Behn weaves a story together with precision, verve and confidence. Witty and pugnacious, Todd’s book is as much a window on the public cacophony of the era as it is a portrait of a playwright.’
Melanie McGrath, Independent