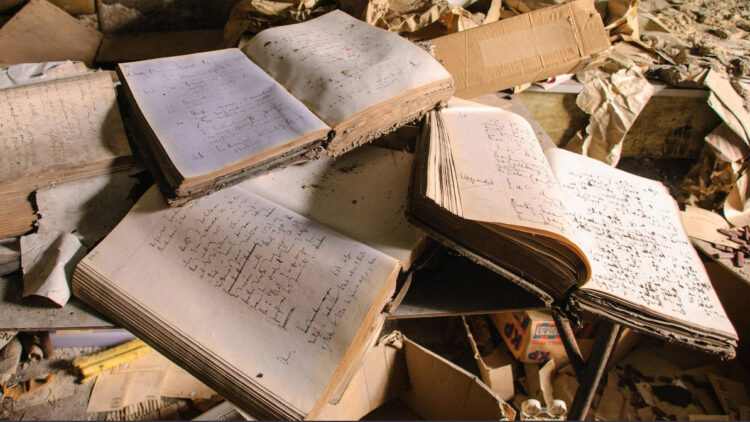 Plunging the depths of ‘a sky blue swimming pool of words’ in Don’t You Know There’s a War On? by Janet Todd

“If you write your life, tell your truth … the dreary with the dramatic. The dreary IS the dramatic.” So writes the disingenuous Joan Kite, a one-time war bride and now a mother, in the sweltering summer of 1976, scrawling in notebooks, “cheap and lined with pale blue covers” – a present from her daughter, Maud, who teachesFrench in the local school where she herself was an unhappy child. The two women live a threadbare life at 14 Ackroyd Close, Norton – “a dismal town, neither village nor city” (we are never told where it is: there are many Nortons in the UK); and they seem to know no one save Phyllis – a special friend of Maud’s, despised by Joan, now married and absent from their lives, but a threatening presence in the notebooks and necessary to Janet Todd’s smouldering novel. It is Phyllis whose writing begins and ends the book.

“What sort of private hell have the two women created in this house?” asks Phyllis on the first page. “The mother is a monster”, she tells us bluntly, and as we read Joan’s account of her thwarted life, we wonder if it might be true. Certainly, Joan is controlling, critical and embittered. “I know now. Don’t have expectations. Don’t need anything anyone else must give.” She writes of her loveless childhood, where a pampered mother and distant father were countered by a maiden aunt – “One of those leftover women” – who took her one winter to magical woods, who recited poetry, collected moss and played her music: the music Joan loves to listen to now as she takes her luxuriant afternoon naps, while the heat “pushes one further and further towards stillness … like being eaten while dissolving”. She writes of her spoiled cousin Clare, who hosted a dissolute party in 1944 at which
Joan was raped by the soldier she then had to marry. Shortly after the wedding, he “had the supreme grace to die”. She writes of her struggle to raise her daughter: “Does she think she had a happy childhood? That would be insane”. And she writes of her current life with Maud, who reads Russian biographies to her and cooks soft foods, though she eats nothing herself and is painfully thin. “Does she want to disappear?” Joan asks. “She’s keeping something from me.”

As the heatwave builds and Joan writes on – increasingly enfeebled – the force of things not written, not said, not understood, becomes almost unbearably compelling. Todd’s lush prose folds into itself, with images of dissolution, self-consumption and swooning, undercut with domestic detail: “Economies. Crimplene, biro, fish fingers, Bri-nylon”. It is undercut, too, by an awareness in Joan – and the reader – that what she writes is not the whole story. She tells of a visit from Phyllis, who has heard that Maud is ill. The worried young woman is rebuffed – or is she? “I’ve recorded this”, Joan explains. “Perhaps it happened just so, perhaps not.” “I am tired of writing, I say to Maud. I am lying of course. It’s
not fatigue. More like apprehension.” If what she writes is true, Joan has reason to be wary. Her journal’s final revelation is shocking. Of course, Phyllis does not believe it, when she reads the notebooks at the novel’s close. And we are left puzzling. “Books aren’t for thinking”, Joan tells
us of fiction. “They’re to wash over one or, better, let one wallow in a sky blue swimming pool of words.” Don’t You Know There’s a War On? gives the lie to this; it is a dark and strangely disquieting pleasure.