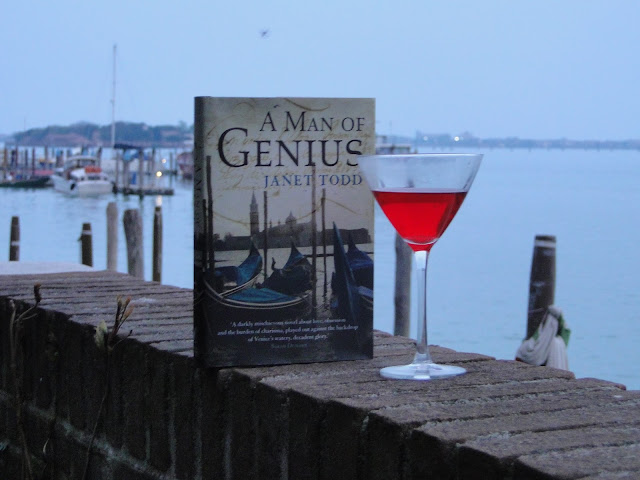 Janet Todd, author of A Man of Genius, joins us today to match her new book with the perfect drink. But first an excerpt from the novel:

A Man of Genius and The Campari Spritz

Janet Todd, author of A Man of Genius, joins us today to match her new book with the perfect drink. But first an excerpt from the novel:

“Annabelle looked at the corpse. Hands and head separate. Blood had leaked from wrists and neck. Fluid covered part of the distorted features. The open eyes were stained so that they glared through their own darkness. A smell of rotting meat.

She wiped old blood off her hands with her handkerchief. Her maid would wash it clean.’

Ann felt the smile. ‘I will cross out the fluid and rotting meat,’ she said without looking up.”

I prefaced my novel with this invented passage from a Gothic fiction to introduce my main character, Ann, through what was going through her head. She’d been writing sensational Gothic novels for many years, and her own and other people’s plots had filled her imagination from childhood to the present (the early 19th century). Yet, when caught in her own Gothic world of shadowy identities and tortuous pursuit, she was as bewildered as any of the heroines she invented.

After this preface I moved back a few years to introduce Ann to the man who became her obsession and torment: a very different sort of writer, a man regarded by himself and many others as a ‘genius’:

“She met Robert James in St Paul’s Churchyard. The bookseller J. F. Hughes held a dinner once a week for his distinguished writers and a few hacks. She was invited to leaven the party with what a prized pornographer called ‘femality’. Mary Davies, who wrote children’s primers for numbers and letters, was absent. Hers was a more respectable trade than Ann’s gothic horrors but Mr Hughes judged Ann less prissily genteel in men’s company.

An Italian was there. He said little except when talk veered towards argument. Then he remarked there was a sundial near Venice that claimed to count serene hours alone. How good, he added, to take notice of time only as it gives pleasure.
‘That sundial had not the English art of self-tormenting,’ said Richard Perry, an intense, gentle man introduced by Mr Hughes as a reviewer and former bookseller.

‘It’s surely not so easy to efface cares by refusing to name them,’ said Ann.

Nobody pursued the point. Signor Luigi Orlando felt no need to facilitate further.

Later, much later, she wondered why Robert James had been invited. He’d published nothing of consequence beyond that amazing fragment of Attila. Did Mr Hughes believe in his promise as fervently as his friends did? As he did?

At first he’d been silent and she hadn’t much remarked him. During the introduction she’d failed to note his name, being too engrossed in her own. Then, as afternoon turned to evening, and wine and conversation flowed, he’d started to dominate the talk, to catch and keep attention. He spoke animatedly. She knew who he was then.”

The exhilaration and pain of the relationship of Ann and Robert came from fascination and repulsion on both sides.  There was mutual torment–but it is with Ann that the book’s consciousness primarily rests:

“To her, Robert’s imagination was now a physical body to be nurtured and cared for, like a difficult disturbed child. She’d intended to be its nurse and comforter; instead, in her darkest moment, she felt she’d become its dependent, a kind of parasite or tumour growing out of it.”

A Man of Genius is a psychological and historical mystery and nothing is ever quite what it seems at first, either in London, where the story begins and ends, or in Venice, where relationships and minds unravel.  Both cities are full of spies and surveillance: identities and memories become insecure and troubling.

The drink to go with the book is close to the traditional ‘Sbagliato’. I call it ‘Dark Memory’ and give it a context of pomegranate and coloured tumbler.

When I go to Venice, the drink I most like to sip in the open air by the side of a canal is its common cocktail, the Campari Spritz, made of Prosecco, the sparkling wine of the Veneto region, and Campari. If you add some Italian Vermouth, a semi-sweet sort, it turns into stronger, less ‘outdoor café’ sort of drink.  In this stronger form it works well before a lunch or dinner with a heavy course of pasta!

For two cocktails these would be the amounts:

I would suggest it should all be mixed in a Murano glass tumbler in red and blue.

Now, given the colour of the drink, perhaps a little orange peel might look nice draped over the rim, but I would prefer a rich pomegranate placed on the side, opened so that its seeds would glow and the drinker might pick at them while holding the coloured tumbler and smelling, then tasting, the cool drink.

I took the photograph of the book beside the drink on the wall of a small garden beside the southern lagoon on La Giudecca Island.  I would have put a pomegranate in the photograph –if one had been available in season. But on this Venetian island you cannot buy a lot of produce that is out of season, nothing like the full panoply of the world’s fruit as you have before you in an English or American supermarket. Pomegranates ripen in September and can be eaten through the winter round to February. My main characters, Ann and Robert, are in Venice for a cold and torturing winter, so I think this fruit appropriate as an accompaniment for the book and the drink–-though unavailable to me in a Giudeccan spring.

So, please do drink the drink in whatever glass is yours, close your eyes and imagine you hold a costly Murano tumbler, while your other hand toys with the seeds from a blood-red pomegranate. Then of course open your eyes and read A Man of Genius.