The life of a prodigious playwright is set in the context of roiling political dramas. 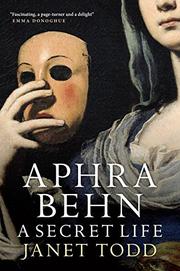 prolific dramatists of Restoration England. In a revision of her biography of Behn published in 1996, Todd (A Man of Genius, 2016, etc.), editor of the seven-volume Complete Works of Aphra Behn, The Poetry of Aphra Behn, and the journal Aphra Behn Studies, offers an authoritative portrait of a defiant, wily, and enterprising woman. Todd acknowledges that much scholarship has been undertaken in the 20 years since her original biography, and she cites about two dozen of these studies in her bibliography; however, they seem to have affirmed, rather than altered, her shrewd, sweeping view of 17th-century England and the admiring portrait she ably fashioned in her earlier book. Tall, attractive, and witty, Behn was “gregarious, enjoying an evening of sociability,” and fond of drink. She was “sensual as much as sexual, interested in both men and women,” and likely preferred “flirtation and repartee” as a way of avoiding venereal disease and pregnancy.

She was adventuresome as well, traveling to the British colony of Surinam, probably as a spy, in the early 1660s, returning as Mrs. Behn; scholars have been unable to identify the mysterious Mr. Behn. A comely widow, she was courted by the “moody and self-centered” Jack Hoyle, with whom she fell in love. “Behn would desire other men sexually,” Todd asserts, “but no one rivalled Jack Hoyle in her imaginative and emotional life.” Steeped as she is in Behn’s work, Todd gives close, perceptive readings of her oeuvre, including her abundant output of poetry; where relevant, she connects these works to the politics of the time: the clash of Catholicism and Protestantism, the rise of Tories and Whigs, and the fraught royal succession. Her “political principles were those of a ‘pseudo-aristocrat’ ” who “internalized” upper-class views and pretensions.

A brisk, entertaining, and richly detailed portrait of a unique woman and her era. Read more.