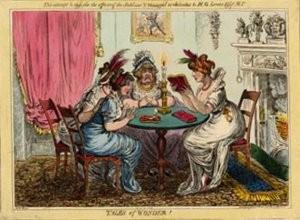 Guest Blog post at the Mitford Society blog: Historical Italy and A Man of Genius

Annabelle looked at the corpse. Hands and head separate. Blood had leaked from wrists and neck. Fluid covered part of the distorted features. The open eyes were stained so that they glared through their own darkness. A smell of rotting meat.

She wiped old blood off her hands with her handkerchief. Her maid would wash it clean.

Ann felt the smile. ‘I will cross out the fluid and rotting meat,’ she said without looking up.

After this preface I opened the novel proper by going back to Ann a few years earlier:

She met Robert James in St Paul’s Churchyard. The bookseller
J. F. Hughes held a dinner once a week for his distinguished
writers and a few hacks. She was invited to leaven the party with what
a prized pornographer called ‘femality’. Mary Davies, who wrote
children’s primers for numbers and letters, was absent. Hers was a
more respectable trade than Ann’s gothic horrors but Mr Hughes
judged Ann less prissily genteel in men’s company.

An Italian was there. He said little except when talk veered towards argument. Then he remarked there was a sundial near Venice that claimed to count serene hours alone. How good, he added, to take notice of time only as it gives pleasure.
‘That sundial had not the English art of self-tormenting,’ said
Richard Perry, an intense, gentle man introduced by Mr Hughes as a
reviewer and former bookseller.
‘It’s surely not so easy to efface cares by refusing to name them,’
said Ann.
Nobody pursued the point. Signor Luigi Orlando felt no need to
facilitate further.

Later, much later, she wondered why Robert James had been
invited. He’d published nothing of consequence beyond that amazing
fragment of Attila. Did Mr Hughes believe in his promise as fervently
as his friends did? As he did?

At first he’d been silent and she hadn’t much remarked him.
During the introduction she’d failed to note his name, being too
engrossed in her own. Then, as afternoon turned to evening, and
wine and conversation flowed, he’d started to dominate the talk, to
catch and keep attention. He spoke animatedly.

She knew who he was then.

My purpose in A Man of Genius is to bring together a woman writer who sees herself as a jobbing novelist and a male poet who’s regarded by many as a ‘genius’. The exhilaration and pain of their relationship come from a combination of fascination and repulsion on both sides. She may suffer more severely but the relationship is, at base, one of mutual torment. However the work is a psychological and historical mystery and nothing is ever quite what it seems at first….

For my work as a critic and biographer of women in the late eighteenth and early nineteenth centuries, I read a lot of Gothic novels. I relished the gory woodcuts that often accompanied their title pages. Wonderfully crude and energetic.

I was especially interested in the women who wrote them. The authors weren’t all women but a substantial number clearly was. On the whole their lives are obscure but, when we can hear them at all, they make no claims for their hack work and are eager to state they are not encroaching on the male territory of Literature. Often they claim they write only for money and because they have to: they are spinsters with ailing fathers or they are widows or abandoned wives.

While the mass market was growing for cheap novels and sensational tales, fed by scribbling writers, a contrasting cult of the ‘genius’ grew up. He—and it was usually a ‘he’—was understood to be a distinctive and specially endowed human being. Consequently he was not constrained by the same morality and rules as other mortals. To sustain his role he needed immense self-confidence as well as the belief, even adulation, of others.

My biography, Death and the Maidens, described the effect of a real and haunted ‘genius’–the poet Percy Bysshe Shelley–on Fanny, the eldest daughter of the great feminist writer Mary Wollstonecraft, as well as on her half sister Mary Shelley, whom he later married, and on his first wife Harriet. In A Man of Genius, an entirely fictional work, I imagine what occurs when the assumed genius begins to doubt his superior powers and when his lover fears her idol might have no substance.

The setting for much of A Man of Genius is Venice. I describe the city at a special moment in its history. For centuries Venice had grow rich and powerful as the dominant maritime and commercial state along the Adriatic. It boasted a thousand-year-old past as an independent republic. It had been home to the greatest sculptors and architects, as well as to the most celebrated Renaissance painters, Tintoretto, Veronese and Titian. Its richness in money and art was legendary.

But, by the end of the eighteenth century, it had suffered a long decline and the French emperor Napoleon Bonaparte found little opposition in 1797 when he decided to conquer it and subsume it into his Italian empire.

After this shaming defeat, Venice was shunted back and forwards between France and Austria until after the battle of Waterloo and the final defeat of Napoleon it fell finally into Austrian hands and was made part of the kingdom of Lombardy and Venetia. A few Venetians collaborated with the Austrian masters, appreciating some aspects of the order they brought to the city, others preferred the French as being closer to them in temperament, though more plundering of Venetian treasures. Others hugely resented what had happened to Venice and plotted for independence –an independence that would never return.

In 1866 Venice was subsumed into the new kingdom of Italy.

The run down and conquered city of 1819-20 is the backdrop of my story. Venice was still at that time part of the grand tour for gentlemen from Britain for it retained much of its amazing art and architecture. At the same time it was beginning to attract more modest middle class tourists. These were armed with an increasing array of guidebooks.

The era of mass tourism was, however, still in the future. It awaited the coming of the railway.

One of the more bizarre events happening at the time my characters travelled to Venice was the scandal of the British royal family. As so often in history, the royals provided much entertainment for the public at home and abroad. To secure the succession the dissolute Prince Regent had been urged into an alliance with a German princess Caroline of Brunswick. He took an instant dislike to her and desperately sought a way out of the hated marriage. Over the next years, as she travelled with a rather louche entourage around Europe, he worked to establish enough evidence to bring about a divorce. She was especially linked in scandal with an obscure Italian called Bartolomeo Pergami, much decorated with the honours she bestowed on him: the pair provided great amusement through the newspapers and cartoons. My characters in Venice couldn’t avoid hearing of what was entertaining all of Europe.

So — my novel is set in specific history but is not about history. It occurs in a particular place that is both real and imaginary. But, then, there is always something ‘imaginary’ about Venice.

Janet Todd has just retired from being an academic mainly in the US and the UK. Her last positions were as Professor of English in the University of Aberdeen and President of Lucy Cavendish College, Cambridge. Her most recent works have been introductions to the novels of Jane Austen and biographies of women writers from Aphra Behn to Mary Wollstonecraft and Aphra Behn. A Man of Genius is her first original novel.